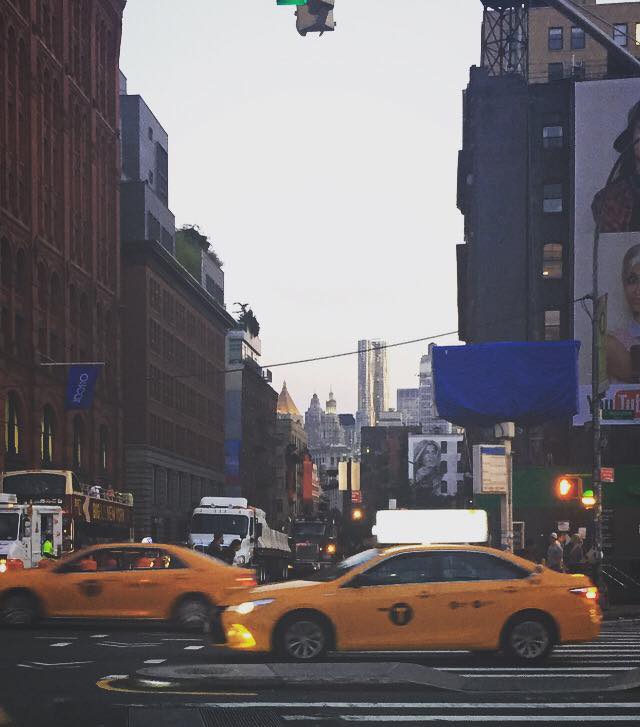 It’s cliché. It’s almost so cliché that I’m embarrassed to admit that I’m sitting in a coffee shop (a real one not a Starbucks) on a rainy day in SoHo, Manhattan writing this very story that you have (hopefully) committed to read. I’m also trying to figure out the perfect place to start this. It’s either between my mother nagging me all summer to get off my ass and get to New York City or me poppin’ Xanax. I agree the second sounds better, but without my mother this entire journey wouldn’t be possible and even though that is also very cliché it is very true. Thanks mommy. I’m going to proceed with the Xanax part now.

I opened the bottle discreetly and quickly shoved two white pills into my mouth. These two wonderful pills would hopefully keep me from fainting as I awaited my flight to New York’s John F. Kennedy airport. I’m a terrible flyer, I really am. It’s so bad that every time that I fly, I am convinced that I am going to die and act accordingly so. For most people, flying is scary for a fear of heights or terrorists, but for me it’s strictly not being able to trust machinery or the people flying it. It’s something that I’m aware that I really need to work on, but the best way that I can work on it for now is letting two Xanax absorb into my bloodstream. I had never flown JetBlue before which also made me nervous. I was used to flying across the country when I was a kid on Southwest to visit my dad in Texas, so I was accustomed to the drill on such flights. I have also flown Delta and American but never was able to relax and truly enjoy my flight on the two. Also, don’t even get me started about Spirit, it’s a joke….don’t let your wallet fall for it. As I sat in the airport waiting for my delayed flight, I really tried to picture myself as a New York City girl. In three hours, I would be one. That was it. It was like I was preparing to lose my innocence again, but this time to a man named Manhattan. I wondered how it would feel to be a city girl. Would I become a different person once I lived there? What if it wasn’t for me and Manhattan broke my heart… would I still be attached? These questions raced around my head, but like any girl ready for a good time, I decided against the “what ifs” and proceeded with the plan to board the plane.

I sat in the waiting area wondering if my throat was really closing or it was just tight and dry because I was really nervous. I took a deep breath and tried to center myself. I decided that maybe getting up and walking around might distract my mind a little bit, so I got up and walked closer to the gate. I wasn’t dressed for the city because I just wanted to get through my flight comfortably. I had on a grey tank top from Target, black Lululemon leggings, black Nike Rosche’s and a white Victoria’s Secret PINK large hoodie tied around my waist for when I wanted to get cozy on the two and half hour flight. I don’t want to completely bore you with the details of my outfit, but it’s incredibly important because suddenly, I felt a tug on my hoodie. A little girl was the culprit. She had very tan skin, thick black ringlet hair, and was clutching a Minnie Mouse doll. That was pretty common for children in the Orlando airport, but I was still confused on why she was tugging at me and not her mother. I looked down to acknowledge the pudgy toddler, and quickly realized that she didn’t speak any English. Just then, her mother approached me right away. “I’m so sorry, she thinks you look like Disney princess,” the woman stated with a thick middle eastern accent. I then realized the little girl wasn’t the only one of this woman’s brood. There was more. Three other little girls came up to me, the oldest who looked to be 8 or 9 years old and a chunky version of Kim Kardashian when she was a child. The little girl was really pretty. I looked back at the mother, “wow you have four girls?” She looked at me and smiled. I hoped that she had understood me. “Yes, I do,” she answered as she introduced me to her children who were all acting the way sisters do, you know pulling on each other and whining. “I’m the oldest of four girls,” I explained. We talked until we were called to board the plane. I had learned that she was living in New York for part of the summer with her girls. They had travelled all the way from Israel to escape all of the events that were going on. If they had travelled from an area of war just to have a better life for a bit in America, I could surely calm down and board the damn plane without nearly passing out. Meeting this family made me feel thankful and sad all at the same time. I was torn by wanting to hug them all, invite them to live with my family in Florida, and just being normal and saying how sorry I was and that I would pray for them. They were called to board the plane before me, so our conversation was cut short. I still think about them to this day.

I boarded the plane and sat in the middle seat. Not my first choice, but it was right near the wing of the plane which is the location that I deem best for all nervous flyers unless you are in first class. I’ve been in first class a few times, first when I was 14 where the stewardess offered me white or red wine and I gladly accepted the white. I also begged my parents to book a first class flight for me since. Anyway, I had absolutely dreaded this moment for weeks. The moment where you are sitting on the plane, while it’s taxing the runway, strapped in thinking, “well I can’t turn back now.” The plane became airborne as my body gently pressed back into the seat. This was it. I’m currently getting nervous while writing this because I hate flying that much.

I’m not sure if all JetBlue planes are this cool, but when I had boarded the plane all of the windows were shut so that the blue LED light that was wedged in-between the celling and the overhead compartments would glow as bright as possible. I’m also not sure if it was dry ice or just really cold air, but above the blue lights, white puffy cold smoke billowed out of teeny holes making me feel like I was in a night club at 11 am instead of a large metal sky tube. When I got to my seat, I noticed that each chair had a pretty large TV screen in the back of the headrest in front of them, and streaming new and popular movies was an included option as was Direct TV. I quickly found the Kardashian’s on TV and tried to relax.

While we were up in the sky, I decided to watch My Big fat greek Wedding 2. Everyone on the flight kept the windows closed, which I thought would freak me out, but actually made me feel more secure. I didn’t expect myself to relax. Even if I’m watching a movie on a flight, even after having taken my special flying medication, I still tend to feel uneasy and silently freak out. My brain finally lost the fight, and I finally relaxed enough to enjoy the entire movie. My flight story actually gets better too. I’m used to the same deal on flights after we’ve been up in the air for sometime. They eventually come around with nuts and take your drink order. Not JetBlue. They came around with really good snacks. I’m talking about Doritos, Oreo cookies, and even Terra chips. I was really happy as I requested a bag of exotic blue potato Terra chips. They took my drink order and I asked what hot drinks that they offered. “We’re partnered with Dunkin Donuts, so anything they have – coffee, tea – we can make.” I ordered a hot green tea which came in a Dunkin Donuts cup. I can’t put into words how nice it was to watch a movie and relax with a hot cup of tea 30,000 feet above ground. When I landed in New York, I felt refreshed and ready to take on the rest of the day.

When I got to my dorm, I noticed I wasn’t alone. In fact, 3 other girls had been living there too. It was also hotter than hell in the dorm. I unlocked my bedroom door hoping to find a new BFF but was mistakingly wrong. What I found was the two beds in the room pushed together to make one, and stuff scattered everywhere. I guess NYU didn’t tell them I was coming. How awkward, I thought as I began to separate the beds and clear off my desk and dresser. I also began to hope that my new roommate wouldn’t hate me for rearranging her stuff because after all, I still was a complete stranger. I decided to leave a note on her pillow with my phone number just incase she came back and was freaked out by the recent room renovation that had taken place without her consent. I prayed she was a normal understanding human being as I placed the note on her pillow and proceeded to walk out of the room to head to Times Square. She and my other two roommates didn’t come back that night, or the next, or the next.