When something big happens in someone’s life, people usually start with the “before.” Well, I am not most people, so I am going to start with the “after” before I get to the “before.”  As I sit here on my couch this summer, I can’t help but think wow, this time last year I was having the time of my life. Last year at this time I was on my way to New York City to live there for a couple of months and to study at New York University, a school I thought I would never be able to attend. But nevertheless, my bags were packed and I was on my way to a 13 mile island that held almost 9 million people, all alone. I was so excited, I couldn’t leave my family’s beach house fast enough. Before I knew it, my Converse sneakers had hit the boiling pavement in Manhattan. At that very moment, I couldn’t have guessed that I would eventually trade in my beloved Converse for a pair of Stan Smith’s and become closer to finding the woman I’ve always hoped to be.

I resided in what New Yorker’s call SoHo, short for “south of Houston st.” It was a really nice neighborhood and you could just see the residents were oozing with cash flow. This was the 30’s area of New York City. To clarify by “the 30’s” I mean that these people had a lot of money and small children. Which meant that they had their bachelor’s degree by 20, their masters by 22, and their own successful business by 25. They had gotten hitched, probably at some swanky Manhattan hotel, and created their first human a few months later. Which brings you back to the “now” that I was living in. I passed so many young 30’s women everyday. It was rare that you saw them dressed to the nines, as most people picture New Yorker’s in their mind, because they were always on their way to Soul Cycle. Yes, this was the part of Manhattan where the women were free to do whatever the fuck that they wanted to do during their day. So they would throw on their green Stan Smith Adidas, their Lululemon workout outfit set, and walk to Soul Cycle. I won’t continue to bore you with the rest of the details but I just wanted to paint a picture of what I was ultimately surrounded by. It was nice, but it was the same thing every day. Where was my adventure? I thought to myself on my walk home from class one day. It was 8:30pm and I still hadn’t made plans, and I still hadn’t made friends. I went back to my dorm to make some pasta and try to relax. While I was waiting for my dinner to cook, I sat on a barstool in the tiny kitchen and began to scroll through my Facebook feed. I came across a post that was about to get the fun ball rolling for me from an unlikely friend. To preface this next part, I am friends with A LOT of people on Facebook. However, this one happened to own a huge company that basically tours colleges, throws crazy parties at the colleges that they tour, and then make epic videos that recap each college and college party and put it on Youtube. Ask any college student. They will know who I am talking about. I’m friends with Arya, the owner on Facebook because he fucked me over when I was a freshman in college. I was attending the University of Alabama, and in Tuscaloosa most bars/clubs are 19+. I’m Shook, his company threw an event at a place that was 19+ and sold people 18+ tickets. I bought 2 VIP tickets and basically got screwed. So  I added him on Facebook because the website for the company didn’t have adequate refund information. After I figured out that I wouldn’t be getting my money back, I kind of just let it go. I was always interested in possibly getting an internship with the company anyway because at the end of the day, I’ve always been interested in filming, editing, social media, and overall growth in companies. So I kept him as a friend, a friend that I didn’t know and that I basically just gave a hundred dollars of my graduation money to.

Now, back to the Facebook newsfeed part. I happened to come across a post from Arya that stated that he was looking to hire in Manhattan. I messaged him immediately. “Hi, I’m in NYC. Is this a temp position? I’m located in SoHo…just let me know the details if you are still looking.” Not very professional, I thought. Arya is only 2 years older than I, so I figured it was okay. After all I was Facebook messaging him anyway. He told me to come by his loft the next day at 11 am and to bring my laptop. He told me a lot of people work together on his company at his place. “844 Broome St. buzz for Sullivan/3 when you get here. See you then,” he wrote. I started to freak out. What was I going to wear? Had I ever seen any girls besides models working for I’m Shook? I couldn’t remember. It was all guys. No girls worked professionally there. Do I dress casual? Professional? Sexy? I decided I would wake up early and hit the shops. I lived on Lafayette and all of the good shops were on Broadway which was just behind me. Broome St. was only a ten minute walk from my dorm so I was in luck when it came to my early morning time crunch.

The weeks flew by and I continued to encounter things that I believe I would have not encountered otherwise. For example, one day when I arrived at the loft, Alex kept asking me to take pictures of him next to this huge house plant, holding a magazine. “Okay so what was the purpose of this,” I asked after I was done taking pictures. “ Dude…I’m in the fucking Guess X A$AP Rocky campaign photos that are in this magazine.” Then he went on to explain the whole story about how he was at the shoot and him and rapper A$AP Rocky became close friends. A$AP Rocky had apparently styled Alex with his own clothes! “Yeah, he didn’t like the pants that I was wearing so he just reached into his suitcase and handed me a pair of his. It was so cool. Then we went out to dinner with Kanye West,” he said. I couldn’t believe that I had made friends with such cool people. I was practically drooling. “Who else do you hang with Alex…jeez,” I said half joking. 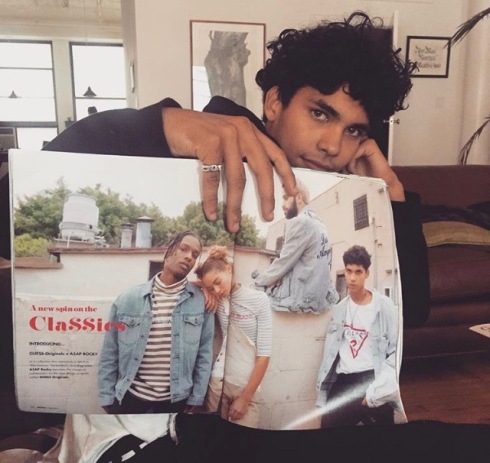 “Well Sarah Snyder and I go way back. Even before the Birkin scandal. Even before her and Jaden Smith started dating. We were like a friends with benefits kind of thing.” Sarah Snyder was an extremely famous Instagram kid. In my opinion, what defines an Instagram kid is someone who is young, rich, and famous simply because of their Instagram account. I was surrounded by Instagram kids in this loft. Sarah, at the time, had 1.2 million followers on Instagram and the only person she followed at the time was Jaden Smith, Will Smith’s son and her boyfriend. Little did I know I would be partying with her later on. But that is a story for another time.

I soon became so captivated by the world that these people lived in. I didn’t participate in the lifestyle too much because this would have included spontaneous trips to the Dominican Republic, LA, Hawaii, a lot of drugs, an influx of models, and sleeping through the whole day. Watching these people taught me more about myself than I would ever know. I respect how they lived, but I often felt like I was the only serious employee of the group. I wanted to see the company grow, I wanted to see it do well.

Arya had hired a guy named Connor to work on new merchandise and new graphics for the company. Connor and I got to talking one day and we decided that I’m Shook needed more than just new merch….it needed a brand new website. It needed new Instagram accounts and a way to reach more and more people. Connor and I got to working on a proposal plan for Arya one day, and everything fell into place. Did you know you can sell Instagram posts to people and they will pay an absurd amount of money for it if marketed the right way? That’s what I started to do. We had of course, the I’m Shook Instagram page and then we also had what are called “girl accounts” on Instagram which are basically pictures of hot college girls that are sent in by the girls themselves. Since the I’m Shook Instagram had such a large amount of followers, we were able to advertise our “hot girl” Instagram accounts to that page and get a huge following. Posting the hottest college girls does not come free, and it was my job to sell spots on our Instagram pages to them for $95. I would sell about 7 posts a day. I couldn’t believe these girls would buy a post on an account which had only 20K followers. I was really good at my job, and the company was growing.

My summer in the city did have to come to an end at some point. I met models, I partied with celebrities, I grew a company, and all well getting part of my degree from New York University. I was able to let my hair down a little, stay out later, sleep most of the day, go to SoHo House, and get into secret nightclubs like Never Never and the “down” section of the club Up and Down. I helped grow a failing business and I made some really awesome friend while doing it all.

The “before” me would have never done such things. The “before” me wouldn’t have had the confidence to hang out with a crowd like this, a crowd of people with so much connection into the public eye. Because of all this experience, the “after” me is a powerful, confident, business woman. I always hold onto the lyrics from the song Empire State of Mind by Jay-Z and Alicia Keys that state, “If I can make it here, I can make it anywhere,” which is referencing making something of yourself in New York City. I felt that I had done that. Instead of making up excuses, taking the easy way out and sticking to a routine, I learned how to balance business and social time. I learned how to work with many different kinds of people, which has currently made me successful in my present. I still keep in touch with Austin and Alex, but not so much Arya and Danny. I don’t even know what they are up to these days. But, my crazy summer adventure last year has given me the tools I needed in life to be successful. Post New York, I’ve started my own successful social media strategy business where I run 7 client’s social media accounts. I also manage 4 accounts on Instagram for a huge brand that in total has about 500k followers. I’m responsible for about 200k of that 500k organic follower growth. I like the person I have grown into post New York and I can’t wait to move to the city after I graduate in the fall. I look forward to hitting the snowy pavement in January wearing my Stan Smith’s.