Don’t worry, I thought the same thing when I moved to SoHo, too. 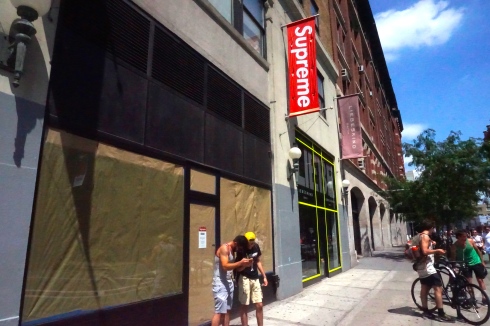 From one girl to the next, here is your education for the day.

I feel like most people know what Supreme is but don’t fully know the whole story. Sure, you’ve seen that cute guy in your English 101 class probably rocking a Supreme sticker on his laptop, but you’ve also probably not put anymore thought into it after that. Or maybe you did know that some of Manhattan’s finest 12 year olds line up in front of this very Supreme store (pictured above) to buy out the store and then literally make enough to retire from reselling the merch. Well, it’s true. Keep reading for more info.

When I lived in SoHo last summer, the Supreme store was a 5 minute walk from my dorm. I had seen the logo before but I didn’t get it. Each time that I would walk by the store, a group of people were always posing in front of the windows or the sign. Supreme was next to other big name stores, so I couldn’t understand why people were flocking to this one store. One day I casually walked into the store and didn’t get why people were shopping there…..they had almost no inventory. I walked in curious and walked out unimpressed. Then I brought it up in a discussion in my style journalism class at NYU. “Okay,  what the heck goes on at this Supreme store?” I asked. The trendy skate kid nearly fainted. My teacher explained that it was the only store on the East coast. After class, one of my classmates told me to watch a documentary about it on YouTube. You can click HERE to watch it too. It’s really interesting and I highly recommend it.

Remember when Kylie Jenner dropped her lip kits and the world literally lost their shit? Remember how people were selling these “rare” lip kits on Ebay for thousands of dollars?? Supreme is kind of the same concept, except they make way less units of product and the demand is much, much higher.

My boyfriend and I were recently in NYC and we decided to go check out Supreme after I finally understood it. After merchandise dwindles down to nothing (which happens quickly) at Supreme, they just close up shop (in the photo above they are closed). They reopen when the next season of items hits the store. Garek and I were lucky enough to get to Supreme on day 2 of their Spring 2017 opening. We waited in line for twenty minutes, got a lot of looks from people who were obviously “too cool” for mainstream clothing, and even got to witness the 12 year old in front of us whip out a mad knot ( Lil Yachty refers to big wads of cash as “knots” so I thought I’d be cool and incorporate the vocab). He even face-timed his friend to make sure he got his clothing order right. Talk about great personal shopping service! Garek talked me out of buying the big hoodie I desperately needed (well, wanted) and we decided to just stick to t- shirts because Florida is just too hot for hoodies. The guys working at Supreme were really helpful and super nice for how exhausted I’m sure they were from the new opening. The clothing we purchased was really great quality and is something that I know I’ll wear all of the time. So now that you know about Supreme, make sure to stop by and check it out when you are in the city next so you can FanGirl like me *insert sassy blonde emoji here*.